Notice the value of those calls are now hovering around $27.50. Don’t ever say “shux.” More importantly is exercising the discipline to let things go relative to the parameters of the risk/reward setup in tango. Had we been holding May or June calls around this time, we’d continue to have let this ride, but with the time setup we had left on these we needed to be quick on the draw to sell into the next wave of strength instead of risk getting caught in a sideways or quasi pullback formation of any kind. We’ll be initiating a new trade model on $STZ either way. We just have to wait for some signature conditions to flesh out before another reentry. In the meantime, our TESLA stalking is nearing very close to our requisite trade parameters. We may adjust those parameters on $TSLA as I will layout in a separate members post. But be ready very soon for the long trade on TESLA

BotTrigger Trade Alert: $STZ our Limit Order has been FILLED, bought back the April $160 strike calls @ $11.70. 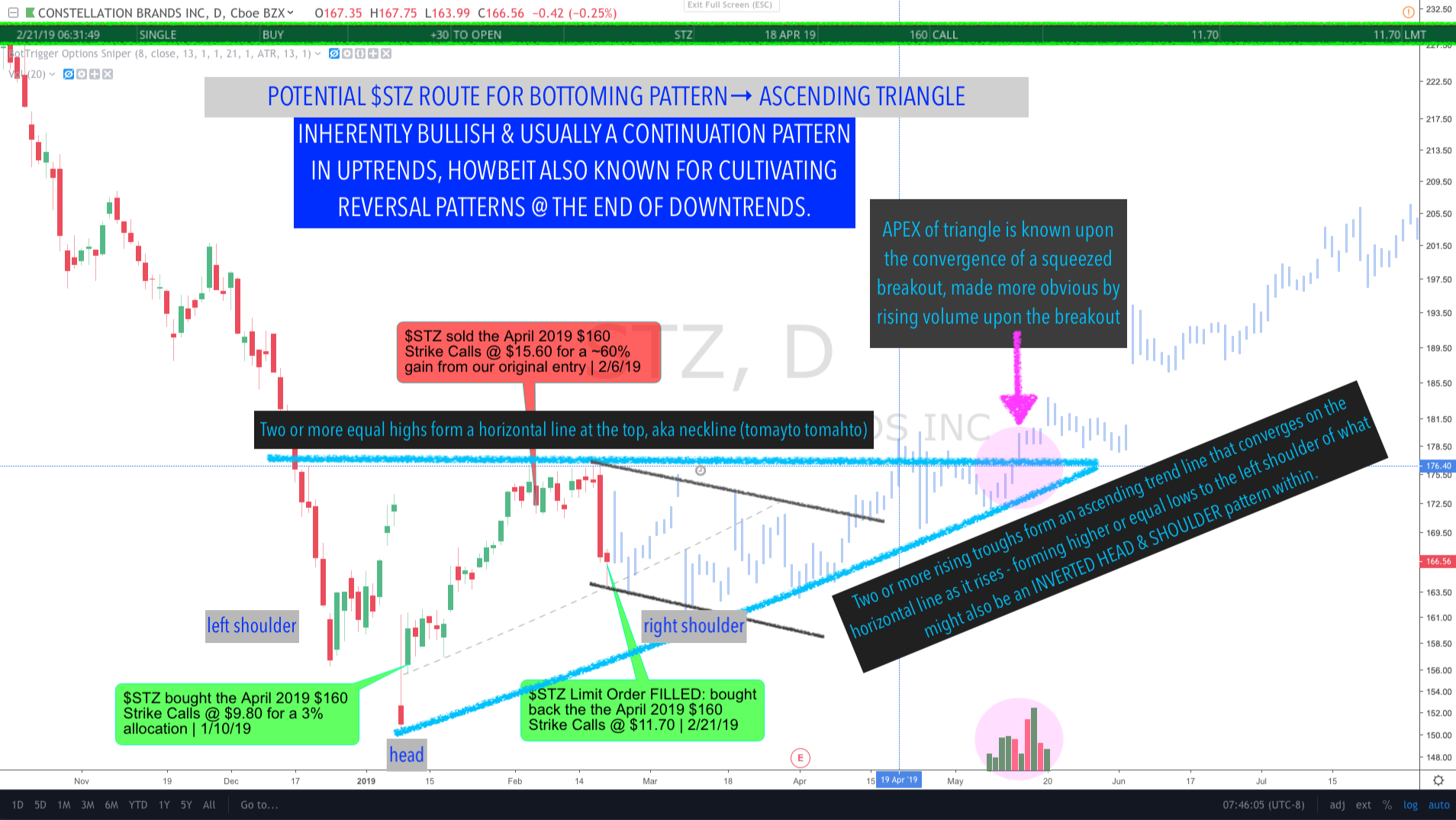 This bearish flush, although inevitable, notice how tangential news of Tilray’s hemp acquisition was the catalyst to induce the pullback. It’s largely reactionary & not merited on anything fundamentally dire. A punch in the gut is all. This pullback was also technically due. In any case, this pullback is part of the larger bottoming process taking place as Constellation Brands is SETTING UP CAUSE FOR HIGHER. https://finance.yahoo.com/video/best-bets-staples-114607179.html . The low of $150.37 that occurred on Jan 8 was a very pronounced “inverted bullish hammer” candle which was also the share value $STZ traded at nearly 3 years ago back on Jan 6, 2016 (1142 days ago). For this reason, we’ve already very likely hit the peak low of this correction & we’re less likely to get a new/incremental low. The head of this inverted head & shoulder pattern, for example, was very likely already printed back on Jan 8 of this year. We’re more likely to get higher trough lows as this further sets up its bottoming base. We will look to add further weight on STZ if we can muster getting down to the low $160s or high $150s of this pullback. A big snap back rally is what we’ll be looking for very shortly from this area. As we near closer to the APEX of this triangle, we’ll be increasing our aggression strategy via different call strikes or call spread models. For now, the April $160’s give us sufficient exposure to capitalize on the forecasted move

We have a near-term bearish crossover that’s cultivating on BOTH the Stochastics & MACD momentum oscillators. Bearish Crossovers are very suggestive when other supporting technical evidence confer / align with one another. It’s not a definitive absolute that the next move is down… but it does shift the value proposition & indicate that buyers are forming a “buyers strike” & holding their buy orders lower. After a 17% rally in 18 trading days, investors/traders always have to ask: is there more upside risk or downside risk after the move. Honestly, a 17% rally in 18 days is exactly what the $SPY has done. If this shows an under-performance relative to many other notable names such as CGC’s 100% gain & even big behemoths like AAPL which rallied 23% off the $142 lows. So STZ has largely under-performed. However always remember, this is the market: the market is not here to give you money but to take your money &/or shake u out, & so this could just be the teasing-shakeout before a gap-up or strong bullish engulfing bar eclipses the most near-term high around the $177 area. If that happens we’ll simply have to reassess. Nonetheless, we have a 60% gain on the trade in less than a month, not withstanding several sell signals that r brewing, In any case, I don’t like the setup right here & I’m more interested in redeploying the capital + gains to increase our weighting in STZ on the “NEXT RELATIVE PULLBACK.” always remember that.
ORIGINAL POST – JANUARY 10, 2019
$STZ Constellation Brands: bought the April 2019 $160 Strike Calls @ $9.80 for a 5% allocation | 1/10/19

BotTrigger Stock Trade Alerts (3): Two of the three alerts mentioned were purchased today…the last alert is a GTC Limit Order. First off, it’s fine to add to these tomorrow. This alert is not time critical by any stretch. We’re playing the long game on these 2 buy stock alerts and will be looking to add more weighting upon the NEXT RELATIVE PULLBACK. Nibbling long tomorrow is absolutely fine. $STZ bought the April 2019 $160 Strike Calls @ $9.80 for a 5% allocation. Constellation Brands $STZ owns nearly 40% of $CGC Canopy Growth Corporation. We are also adding $CGC to the folio bought $37.42. We will look to add to both of these names on a pullback, but buying here after a -57% decline in CGC & -36% decline in STZ as a great area to be nibbling long, ESPECIALLY due to the The more conservative bet is on $STZ and so that’s why we’re very comfortable buying at the money long call options @ the $160 strike. For the more volatile CGC we’re going to stick tight with the common stock for now upon a pullback however we may elect to rotate out of the common stock and roll that capital over into a conservative call spread targeting a 2x gain. For our Cannabis playbook our top 3 right now are CGC, STZ, GWPH, Those are your most conservative plays as they are companies with the largest market share in the industry thus far and are more market-weighted by niche cannabis ETFs than any of the other gambits in the space. In other words, they are institutionally owned holdings. We will also amuse a smaller weighting in two other more speculative names which are $NXTTF Namaste Tech & $ACB Aurora