So far you have seen how well some indicators, such as moving averages, work in trending markets.

However, these indicators are not useful in trading ranges. What you could use instead are oscillators. These are said to be leading indicators, as opposed to lagging indicators, which is what moving averages are, as they tend to lag the trend.

Oscillators lead price action and can give warning of an impending change in price direction, especially when there is a divergence. We will look at divergence later.

Unlike moving averages, which are plotted on the charts, oscillators are plotted below the price chart. 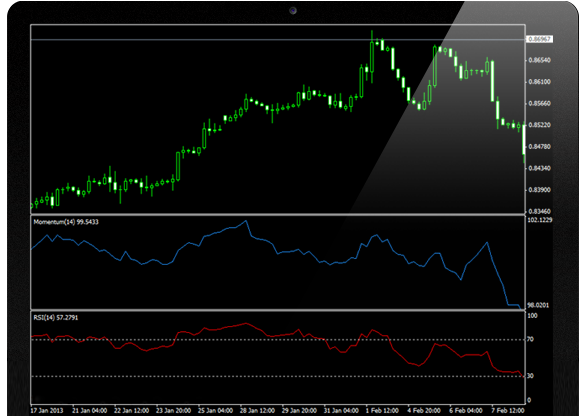 Most oscillators look alike and are interpreted in a similar way. Oscillator indicators are bound within a range, usually between zero and 100. This range is divided into and upper and lower halves by a mid-point line (which is sometimes zero, depending on the formula used to construct the oscillator).

Remember that oscillators are secondary indicators and should not be used exclusively but should be supported by using other indicators as well. You should always look at prices on the chart first, and whether the overall trend supports the idea.

Oscillators can be used to indicate loss of momentum in the price move (trend).

Oscillators are a good tool for determining overbought or oversold conditions and give us a warning that the price trend is overextended and vulnerable. An oscillator will fluctuate between these two extremes of overbought and oversold.

Why so? Because markets are essentially driven by psychological forces and investors’ emotions change from greed to fear, to hope, and to despair. This is what causes momentum indicators to oscillate from overbought to oversold conditions.

In the chart below we can see that even though prices are still rising, the oscillator here (RSI) is beginning to decline, causing a bearish (negative) divergence. This gives a warning that the trend could turn down. 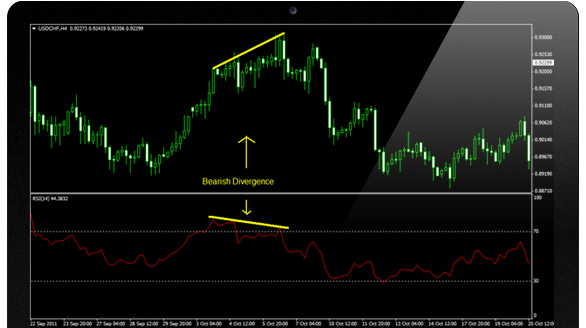 When the oscillator starts to turn back up while the prices are still declining, this is bullish (positive) divergence. 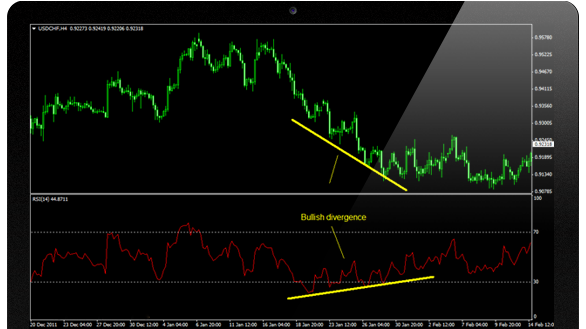 Crossing the Mid-point (or Zero) Line

Another use of the oscillator is when it crosses the middle line (or zero line) which separates the upper and lower half of the range, and to use it as a buy or sell signal. 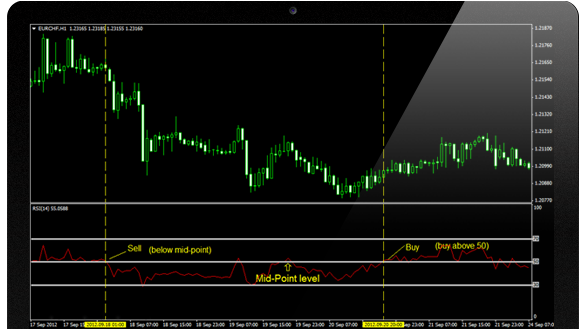 An oscillator cannot just by itself be used to make a decision to enter a trade. It is a secondary indicator. Price always rules and the underlying trend is more important.

Look for overextended conditions, as this is usually where the oscillator is most useful. Consequently, especially look for divergence in extreme conditions – for example, prices going up and making new highs but oscillator turning down. Then also look for a mid-point or zero line crossing, as it may be a signal to buy or sell. Buy when above the line and sell when below.