What are Paradise Papers

The Paradise Papers are a huge leak of financial documents that throw light on the top end of the world of offshore finance.

A number of stories are appearing in a week-long expose of how politicians, multinationals, celebrities and high-net-worth individuals use complex structures to protect their cash from higher taxes.

As with last year’s Panama Papers leak, the documents were obtained by the German newspaper Süddeutsche Zeitung, which called in the International Consortium of Investigative Journalists (ICIJ) to oversee the investigation. BBC Panorama and the Guardian are among the nearly 100 media groups investigating the papers.

The Paradise Papers name was chosen because of the idyllic profiles of many of the offshore jurisdictions whose workings are unveiled, including Bermuda, the HQ of the main company involved, Appleby. It also dovetails nicely with the French term for a tax haven – paradis fiscal. Then again, the Isle of Man plays a big part.

Who is being exposed in the Paradise Papers?

The offshore financial affairs of hundreds of politicians, multinationals, celebrities and high-net-worth individuals, some of them household names, have been revealed. The papers also throw light on the legal firms, financial institutions and accountants working in the sector and on the jurisdictions that adopt offshore tax rules to attract money. The top stories so far include:

This is by no means everything – far more will be coming out over the next few days, much of it with strong UK links.

Where do the Paradise Papers come from?

There are more than 1,400GB of data, containing about 13.4 million documents. Some 6.8 million come from the offshore legal service provider Appleby and corporate services provider Estera. The two operated together under the Appleby name until Estera became independent in 2016. Another six million documents come from corporate registries in some 19 jurisdictions, mostly in the Caribbean. A smaller amount comes from the Singapore-based international trust and corporate services provider, Asiaciti Trust. The leaked data covers seven decades, from 1950 to 2016.

A law firm that helps corporations, financial institutions and high-net-worth individuals set up and register companies in offshore jurisdictions.

With its headquarters in Bermuda and a history dating back to the 1890s, it has become one of the largest and best known of about 10 major companies involved in the specialist arena. The leak shows the US dominates Appleby’s client register, with more than 31,000 US addresses for clients. There were more than 14,000 UK addresses and 12,000 in Bermuda. 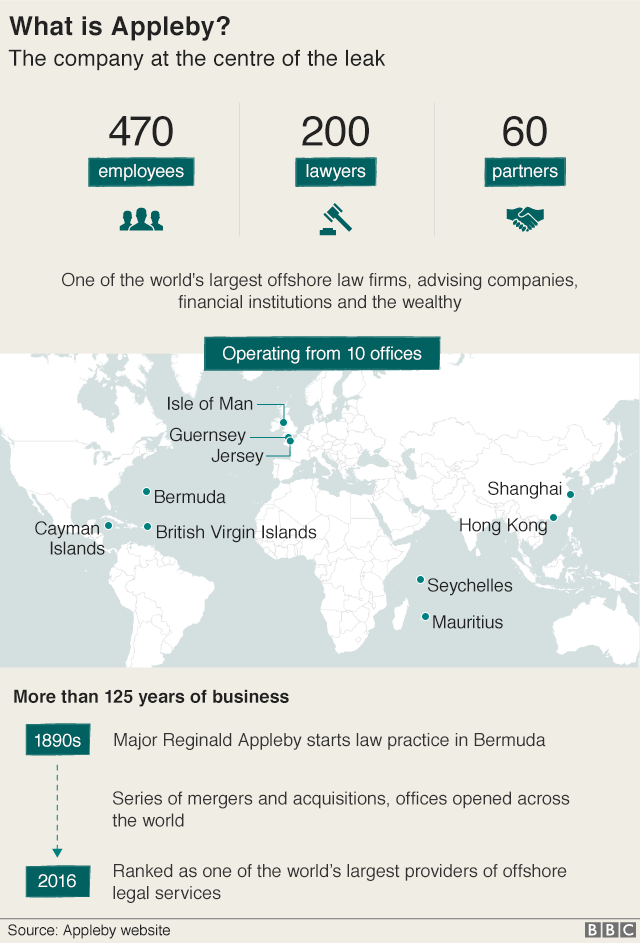 Who leaked the Paradise Papers?

As with 2016’s Panama Papers, German newspaper Süddeutsche Zeitung obtained the original material and was the stepping off point for this investigation. In the case of the Panama Papers, the originator of the leaks, named only as John Doe, issued a manifesto a month after the publication date. A simple statement this time says: “For their protection, Süddeutsche Zeitung does as a general policy not comment on its sources!”

Who is working on the Panama Papers leaks?

As with the Panama Papers, the International Consortium of Investigative Journalists, a global network of investigative journalists, was called in to work on the project. Along with the BBC’s flagship Panorama programme, there are nearly 100 media partners involved in 67 countries, including the Guardian and the New York Times.

Why is it in the public interest?

The media partners say the investigation is in the public interest because data leaks from the world of offshore have repeatedly exposed wrongdoing. The leaks have led to hundreds of investigations worldwide, resulting in politicians, ministers and even prime ministers being forced from office.

Why is this Panama Papers leak different?

The $64m question, or probably more if you are in a tax haven, or offshore financial centre as the industry prefers to call it. It is indeed the fifth major leak of financial papers in the past four years and, yes, last year’s Panama Papers were bigger in size – 2.6TB to 1.4TB – but the scale of the information in the Paradise Papers and how it lifts the lid on sophisticated, upper-end offshore dealings, many linked to the UK, is unprecedented. 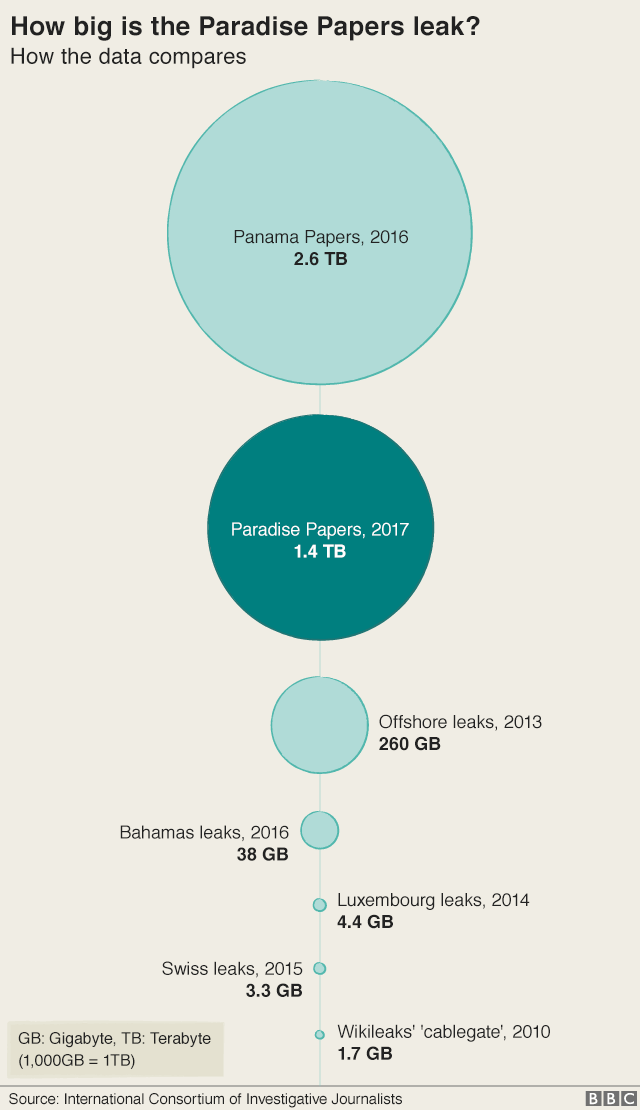 As Gerard Ryle, who oversees member journalists at the ICIJ, says: “This leak is important because it’s the high end of town. People may have dismissed the Mossack Fonseca leaks as they were rogue players who would take any client. Most of the offshore world is not like that at all. Here you have the gold-plated company.”

The documents were tougher than the Panama Papers too. Mr Ryle says: “They came in different formats and it took us a long time to decipher them. There were nice surprises along the way but it was a much more difficult data set.”

The Paradise Papers Wiki list in Canada, India, Pakistan, UK and U.S. is below:

Three former Canadian Prime Ministers are implicated in the Paradise Papers: Jean Chrétien, Paul Martin, and Brian Mulroney. According to the papers, Stephen Bronfman, Canadian Prime Minister Justin Trudeau’s adviser and close friend, teamed up with former Liberal Party Senator Leo Kolber whose son moved millions of dollars to a Cayman trust. The offshore maneuvers may have avoided taxes in Canada, the United States and Israel, according to experts who reviewed some of the 3,000-plus files detailing the trust’s activities.

Former Pakistani Prime Minister Shaukat Aziz is listed in the papers, having set up a trust called the Antarctic Trust in Delaware.

According to the papers, U.S. Secretary of Commerce Wilbur Ross holds stakes in businesses which deal with Russian oligarchs Leonid Mikhelson and Gennady Timchenko who are subject to U.S. sanctions, as well as Russian President Vladimir Putin’s son-in-law. Other members of the Trump administration who appear in the documents include U.S. Secretary of State Rex Tillerson and Gary D. Cohn, the director of the U.S. National Economic Council. Overall, more than a dozen Trump cabinet members, major donors and advisers appear in the documents and are linked with offshore accounts. These include the major donor Robert Mercer and Sheldon Adelson.

What exactly is a tax haven?

It’s hard to pin down an exact definition. Tax haven is the term usually used in the media and public, whereas the industry would prefer the term offshore financial centre (OFC). It is essentially a financial jurisdiction outside the regulations of your own nation used by companies and individuals to lower their taxes on profits or assets. They are usually secretive and stable. They are also often small islands, many of them UK Crown Dependencies or Overseas Territories, but not exclusively so. Nations such as Switzerland, Ireland and the Netherlands have similar tax reducing mechanisms, while the UK and the US are leading nations providing services that facilitate the use of OFCs.

According to BBC and TheGuardian the papers are a huge batch of leaked documents mostly from offshore law firm Appleby, along with corporate registries in 19 tax jurisdictions, which reveal the financial dealings of politicians, celebrities, corporate giants and business leaders.

Now you know about “Paradise Papers Leak” so tip ForexSQ.com foreign exchange trading experts please if you like this article about “What are Paradise Papers”.