What Are The Panama Papers

The Panama Papers are a leaked set of 11.5 million confidential documents created by the Panamanian corporate service provider Mossack Fonseca that provide detailed information on more than 214,000 offshore companies, including the identities of shareholders and directors. The documents identify current government leaders from five countries Argentina, Iceland, Saudi Arabia, Ukraine and the United Arab Emirates as well as government officials, close relatives and close associates of various heads of government of more than 40 other countries, including Brazil, China, Peru, France, India, Malaysia, Mexico, Pakistan, Russia, South Africa, Spain, Syria and the United Kingdom.

Who Leaked The Panama Papers

More than a year before the first publication of the Panama leaks in April 2016, the German newspaper Süddeutsche Zeitung was offered large caches of documents from an anonymous source. The paper accepted and began to receive more and more material; in the space of a year they acquired a total of 2.6 terabytes of data consisting of documents related to Mossack Fonseca, providing information on 214,488 offshore entities related to public officials.

The leak consists of 11.5 million documents created between the 1970s and late 2015 by Mossack Fonseca. The reporters communicated with the source only via encrypted channels, as he or she demanded anonymity: “There are a couple of conditions. My life is in danger, we will only chat over encrypted. No meeting ever.”

Süddeutsche Zeitung journalist Bastian Obermayer said the source decided to do it because they thought Mossack Fonseca was behaving unethically. “The source thinks that this law firm in Panama is doing real harm to the world, and the source wants to end that. That’s one of the motivations,” he said.

The data was distributed to and analyzed by about 400 journalists at 107 media organizations in more than 80 countries. After more than a year, the first news reports based on the set, along with 149 of the documents themselves, were published on April 3, 2016. Among other planned disclosures, the full list of companies is to be released in early May 2016. 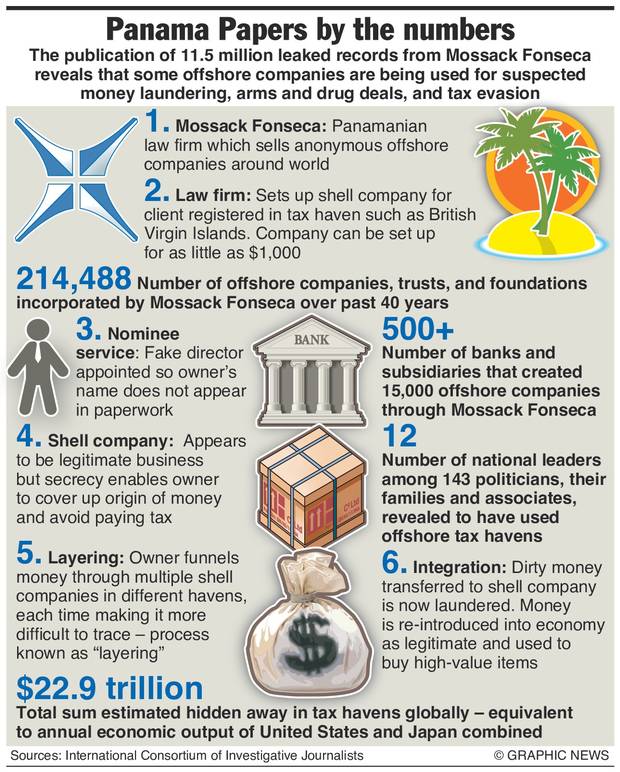 Is it clear anything illegal has happened

The documents do not necessarily indicate illegal activity. But shell companies and offshore accounts can be used to mask the origin of financial transactions and ownership. The files include people and companies that the U.S. has blacklisted due to drug trafficking and terrorism links, according to the ICIJ.


The documents show the myriad ways in which the rich can exploit secretive offshore tax regimes. Twelve national leaders are among 143 politicians, their families and close associates from around the world known to have been using offshore tax havens. 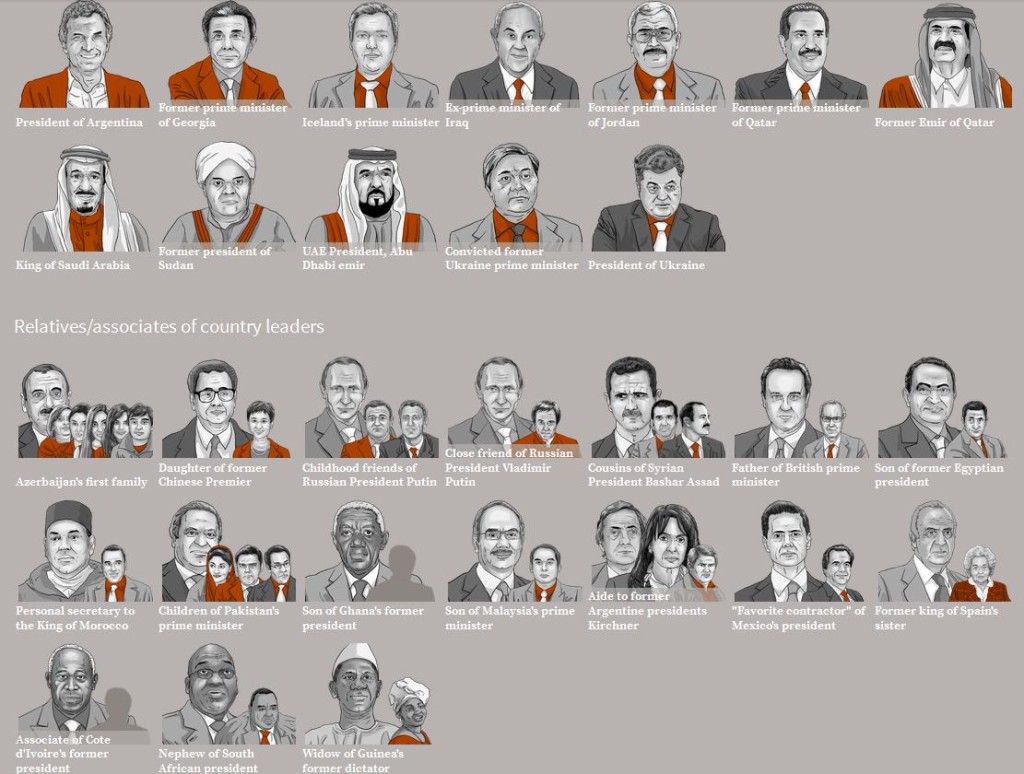 A $2bn trail leads all the way to Vladimir Putin. The Russian president’s best friend a cellist called Sergei Roldugin is at the center of a scheme in which money from Russian state banks is hidden offshore. Some of it ends up in a ski resort where in 2013 Putin’s daughter Katerina got married.

The name of Vladimir Putin does not appear in any of the records in the Panama Papers list according to ICIJ. However, the Papers indicate that close friends and business associates of Putin, including construction billionaires Arkady and Boris Rotenberg, professional musician Sergei Roldugin, and business magnate Alisher Usmanov, had handled assets worth billions of dollars. Political scientist Karen Dawisha said that it was “inconceivable” that the men would have acquired such wealth in the absence of Putin’s patronage. The documents indicate that Roldugin, Putin’s “best friend”, who in September 2014 said “I don’t have millions”, has acquired assets worth at least $100 million, including a 12.5% stake in Video International, Russia’s largest television advertising firm. Kremlin spokesman Dmitri Peskov claimed that the main target of the Panama Papers leak is Russian President Vladimir Putin, despite the numerous other world leaders involved. Roldugin told journalists “I have to take a look and find out what I can say and what I can’t.”

The president of Ukraine, Petro Poroshenko; and the late father of British Prime Minister David Cameron is in the Panama Papers list. Ukrainian President Petro Poroshenko had promised voters he would sell his candy business, Roshen, when he ran for office in 2014, but the leaked documents indicated that instead he set up an offshore holding company to move his business to the British Virgin Islands, possibly saving millions of dollars in Ukrainian taxes.

Government Officials From All Countries Are In The Panama Papers List

Although initially noted that there were no people from the United States in the Panama papers, this is incorrect.

An offshore investment fund run by the father of British prime minister David Cameron avoided ever having to pay tax in Britain by hiring a small army of Bahamas residents to sign its paperwork. The fund has been registered with HM Revenue and Customs since its inception and has filed detailed tax returns every year. See ICIJ If you want to know who did what in the Panama Papers List .

What is Mossack Fonseca

It is a Panama-based law firm whose services include incorporating companies in offshore jurisdictions such as the British Virgin Islands. It administers offshore firms for a yearly fee. Other services include wealth management.

Where is Mossack Fonseca company located

The firm is Panamanian but runs a worldwide operation. Its website boasts of a global network with 600 people working in 42 countries. It has franchises around the world, where separately owned affiliates sign up new customers and have exclusive rights to use its brand. Mossack Fonseca operates in tax havens including Switzerland, Cyprus and the British Virgin Islands, and in the British crown dependencies Guernsey, Jersey and the Isle of Man.

Mossack Fonseca data seen by the Guardian relates to more than 200,000 companies for which the firm acted as registered agent. Often used lawfully to anonymously hold property and bank accounts, these companies were registered in a range of tax havens and this map shows the most popular locations among its clients. The British Virgin Islands held more than 100,000 companies.

Rather than dealing directly with company owners, Mossack Fonseca mostly acted on instructions from intermediaries, usually accountants, lawyers, banks and trust companies. In Europe, these offshore facilitators are concentrated in Switzerland, Jersey, Luxembourg and the United Kingdom.

The information is hard to discover because real owners usually hide behind nominees, people with no real control and no assets in the company who simply lend their signature. A small sample of about 13,000 owners from all over the world, recently compiled by Mossack Fonseca, gives some indication. China and Russia top the list.

How big is the Panama Papers leak

Mossack Fonseca is the world’s fourth biggest provider of offshore services. It has acted for more than 300,000 companies. There is a strong UK connection. More than half of the companies are registered in British-administered tax havens, as well as in the UK itself.

How much data has been leaked

A lot. The leak is one of the biggest ever – larger than the US diplomatic cables released by WikiLeaks in 2010, and the secret intelligence documents given to journalists by Edward Snowden in 2013. There are 11.5m documents and 2.6 terabytes of information drawn from Mossack Fonseca’s internal database.

Are all people who use offshore structures crooks

No. Using offshore structures is entirely legal. There are many legitimate reasons for doing so. Business people in countries such as Russia and Ukraine typically put their assets offshore to defend them from “raids” by criminals, and to get around hard currency restrictions. Others use offshore for reasons of inheritance and estate planning.

Are some people who use offshore structures crooks

Yes. In a speech last year in Singapore, David Cameron said “the corrupt, criminals and money launderers” take advantage of anonymous company structures. The government is trying to do something about this. It wants to set up a central register that will reveal the beneficial owners of offshore companies. From June, UK companies will have to reveal their “significant” owners for the first time.

What does the company say about the Mossack Fonseca leak

The firm won’t discuss specific cases of alleged wrongdoing, citing client confidentiality. But it robustly defends its conduct. Mossack Fonseca says it complies with anti-money-laundering laws and carries out thorough due diligence on all its clients. It says it regrets any misuse of its services and tries actively to prevent it. The firm says it cannot be blamed for failings by intermediaries, who include banks, law firms and accountants.

Tip Us By Share This Article Wrote by ForexSQ

ForexSQ team use sources below to write about the Mossack Fonseca leak BBC The Guardian Wikipedia CNN.