Markets Will Collapse This Friday

July’s NFP data surpassed the consensus but as expected the positive reaction of USD did not last a long time. Considering how often Fed mentioned that they were not troubled about employment and reaching the inflation target was their importance before July’s release limited USD movements. Thus, in ForexSQ we are asking ourselves: Should we imagine anything different from August numbers?

We must look at the developments that come about since last NFP. During the 1st half of August important theme in FX space was consolidation. Pairs kept moving in their horizontal trading ranges except for a few spikes on certain data. With some FOMC members mentioning how they need to think about rising interest rates before it’s too late to decrease the risk exposure one more time fueled rate hike speculations towards the 2nd half of the month. Lastly Yellen spoke at Jackson Hole symposium where she presented the case for an increase in federal funds rate has supported in current months. Though she hasn’t provided any clues regarding the timing of it, her statements were sufficient for DXY to move to 96 level in the August last week.

Considering at previous data we see that August NFP numbers are normally lower than the consent. That was the case for the previous 5 years and normally it is not considered as a red flag. And the time that August NFP numbers cover is generally the time when maximum people go on holidays and it’s simple to see the temporary influence on data. In addition, we see twelve month average came down to 200K from 250K in nearly 2 years. Though that too is not worrisome either. Particularly for developed countries’ economies it’s tougher to bring down employment ratio 1% point  for example from 10% to 9% than it is to carry it down from 7% to 6%. Hence, we can draw a conclusion by saying that even if the NFP numbers are below consensus (unless it’s a very low number like it was in May) USD may continue its current trend.

We know prioritizes inflation of FOMC whereas deciding on monetary policy changes but we can’t pay no attention to the role employment shows. Higher interest rates have a negative influence on domestic demand and employment is the important to offset that. Fed vice Chair Stanley Fischer in his current comments declared that USA is getting almost full employment level. “Full employment” is an economic condition where – in concept – total labor resources are used in the greatest efficient way possible. To put it more basically, anyone who is looking for a job (assuming it’s a faithful job search – we can’t all be astronauts) will find one. Over again August NFP numbers shouldn’t change markets’ prospects on interest rate hike. And if the number is lower than the consensus we could see provisional USD shorting but that wouldn’t be sufficient to change the big players’ approach. Instead, positive numbers could help USD gain further strength in contrast to other currencies. 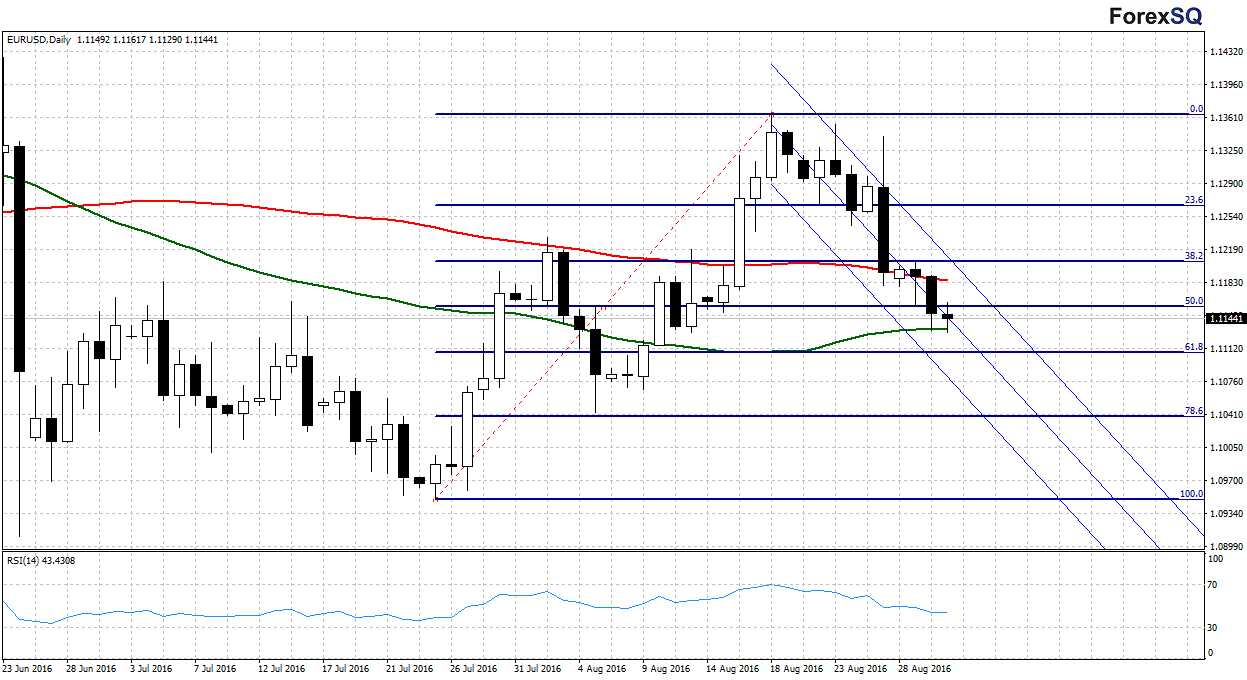 Considering at the EUR/USD regular graph we see that the uptrend that started on July 25th ended on August 18th. 50 percent Fibo retracement of that move is nearby 1.1155/60 and as the pair endures to stay lower that level 1.11 area (%61.8 of Fibo retracement) and 1.1040 (78.6% of Fibo retracement) can be targeted with the support of positive NFP numbers. It is also probable for the pair to test 1.09 area beforehand the meeting of FOMC in September.

Although we see below consensus NFP the downward might continue after a short term upward spike particularly after seeing (on August 31st) how core CPI and  CPI for Eurozone is respectively at 0.2 percent and 0.8 percent. 1.1200/10 area where the Fibo 38.2 percent retracement and linear regression channel is sitting could act as the 1st short term resistance level. If this resistance is violated Fibo 23.6 percent retracement nearby 1.1265 seems as a harder obstacle to overwhelmed.

RSI on regular graph is around 42 and displays that there is more space for the pair to keep going down. Pair might go for a short covering if RSI originates close to extreme oversold levels. The last time regular RSI went under 30 in 2015 at the end of November. The continuation of downward movement is technically support the 100 DMA (red line). 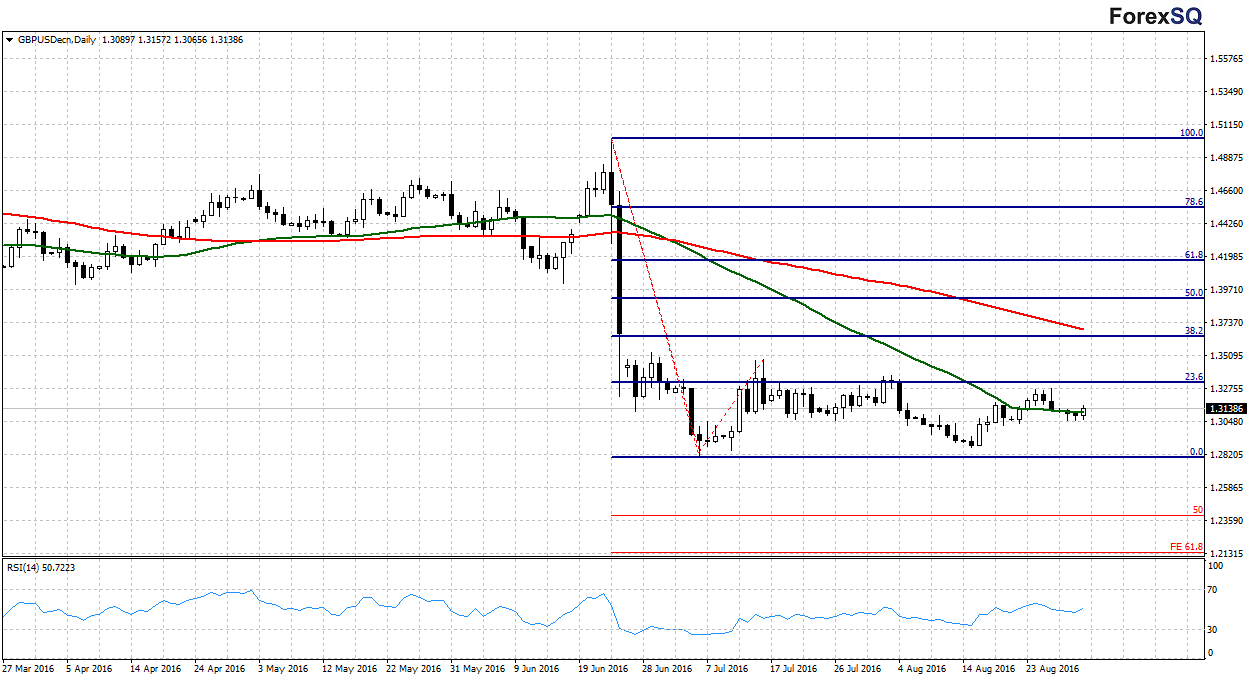 GBP/USD has been staying in a consolidation channel for the past two months since Brexit. Positive NFP numbers may force the pair to test 1.28 level. In case that support is violated, 50% Fibo expansion of Brexit fall around 1.24 level could be the next target. 1.33 area where Fibo 23.6% retracement is located can hold as a strong for a resistance for a while. 50 DMA is still staying below 100 DMA. RSI is close to 50 area and seems neutral at the moment and can stay around that level until NFP numbers are released.

It will be difficult for GBP to gain back the value following Brexit against USD since BoE and Fed are to follow different paths as far as their interest rate policy is concerned. BoE is expected keep expanding its monetary base to offset the negative impacts of Brexit in future meetings. 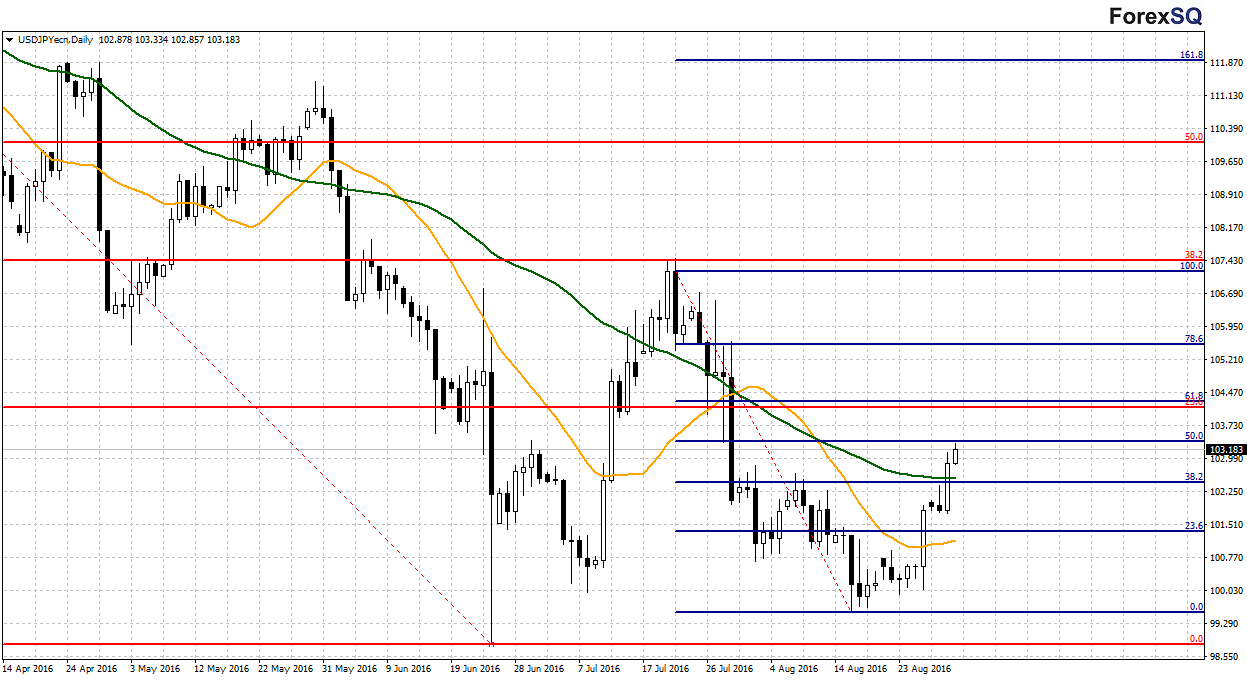 USD/JPY is remaining close to 50 percent Fibo retracement of its last downward movement about 103.40 area. By a decisive move above that resistance pair might target 104.10/20 area where Fibo %61.8 retracement of the equal movement and Fibo %38.2 retracement of main downfall that started to the end of January and lasted for about six months is located. Moreover, the fact that the pair is beyond its 50 DMA is also support continuation of upward movement. In case of a downward consolidation 101.20 area where 20 DMA and Fibo %23.6 retracement is situated is the 1st short term support that could attract the buyers again.

BoJ is one of the new major banks that signal large expansion in near future. Recent comments from BoJ officials and government show that further into negative area they leave the door open for more interest rate cuts. 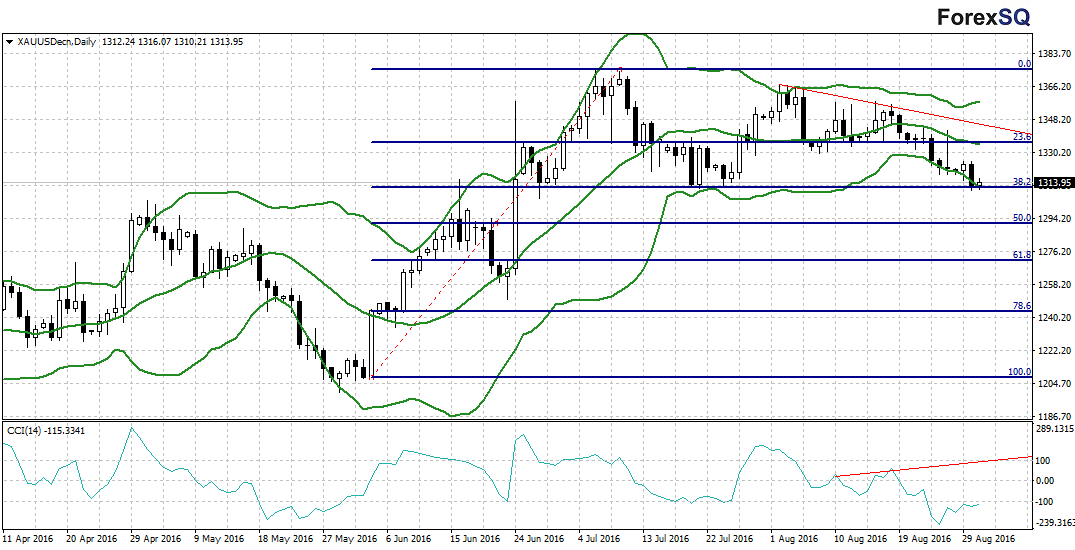 The deviation XAU/USD displayed on daily graph was followed with a break of 1335 support where Fibo 23.6 percent of the recent upward movement is situated. Daily graph display that values are about the lower line of the Bollinger Band moreover CCI is correcting oversold reading -220 but still stays under -100. Both of these signs show that Gold is getting ready for its following move and is more probable to continue its current weakness against USD. 1270 and 1290 levels (Fibo %61.8 and Fibo %50 retracement) might be targeted in case of a positive USD response to NFP is received. 1335 area (Fibo %23.6 retracement) is the 1st short term resistance.

On the other hand we need to remember that generally Gold is considered as a traditional secure haven and with interest rate hike expectations could have negative influences on stock markets which may ultimately cause a higher demand for safer Gold. That might make it harder for USD to increase value against XAU compared to JYP or European currencies.

Tip www.ForexSQ.com forex news blog please by share this analysis on social networks and blogs if you like it.