Previously we discussed about different chart types and mentioned the candlestick chart. We will now discuss this chart in more detail to see how we can use candlestick patterns to help us trade better.

Candlestick analysis was first created by the Japanese many centuries ago, as early as the 1700’s and used by rice traders. It was only recently, in the last 30 years or so, that candlestick patterns began to first make their way into the Western world.

An American by the name of Steve Nison did extensive research in to candlestick signal analysis and published a book in 1991 entitled Japanese Candlestick Charting Techniques. His initial publication gave rise to increased interest in this type of technical analysis.

Candlestick charts provide more information compared to bar charts and line charts. Candles provide better visual information that makes reading price action easier and allow us to get a better idea about market sentiment and any impending changes to it.

Candles show the high and low, as well as the relationship between the open price and the close price.

In this example, white is for up and black is for down. Candlesticks can be used for any time frame, whether it be one week, one day, one hour, or 15 minutes.

Size of Body and Shadow 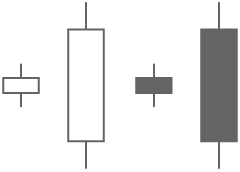 There are over 40 candlestick formations. We will examine the most common ones.

Doji candlesticks have the same open and close price. They suggest indecision or struggle between buyers and sellers.

The Gravestone Doji has long upper shadow and no lower shadow. The open and close prices are both at the low end of the time period. It has a bearish connotation as it usually suggests a bullish rally is near an end and signals a reversal.

The Long legged Doji has a very long shadow and reflects indecision on the part of market participants. It signals an impending reversal of price direction.

The Hammer has a small body near the high and has long lower shadows. The color is not as important. When found in a downtrend, usually it signifies bullish sentiment.

The Bullish Engulfing Pattern, when formed at the end of a downtrend, signifies bullish sentiment. This complete engulfing of the previous candle represents overwhelming buying pressure fading selling pressure.

The Bearish Engulfing Pattern is the opposite of the bullish engulfing pattern and signifies bearish sentiment. Sellers are beginning to overwhelm buyers.

The Piercing Pattern, when found in a downtrend, signifies an impending reversal to the upside.

The Shooting Star, when in an uptrend, indicates an impending reversal to the downside. 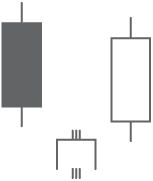 The Morning Star, when in a downtrend, signifies a bullish reversal. Prices start to rise. 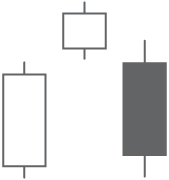 The Evening Star is the opposite of a Morning Star. In an uptrend it signifies a bearish reversal. Prices start to fall.