Back in the early 1200’s, an Italian mathematician by the name of Leonardo of Pisa, also commonly known as simply Fibonacci, became famous for spreading the Hindu-Arabic numerical system throughout Europe and the rest of the world. He did this by publishing a book in 1202 entitled Liber Abaci, in which he explained a certain number sequence, called the Fibonacci sequence.

Fibonacci explained how this series of numbers created ratios, which describe the natural proportions of many things in the universe. Today we use these Fibonacci numbers in the analysis of computer algorithms, biological systems and very often in analyzing financial markets. They form one of the main pillars of technical analysis.

What you need to know is that there are different ratios we can calculate from the Fibonacci number sequence and they care called the golden ratio. And the reason these ratios are important for us in technical analysis is that they give us the important Fibonacci retracement levels and extension levels.

These Fibonacci retracement levels can also be seen as a percentage instead of a ratio.Therefore, we have the most common retracements levels at 23.6 %, 38.2% and 61.8%. See the chart below. 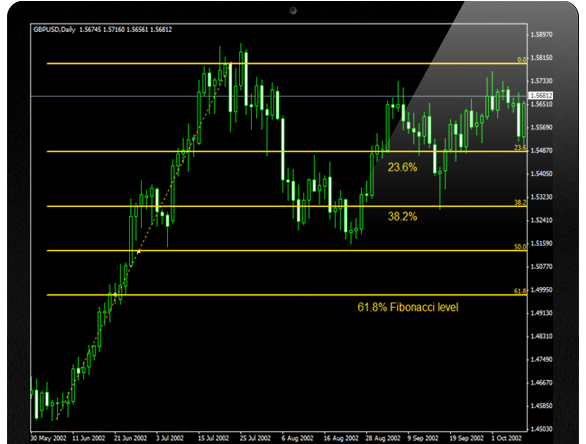 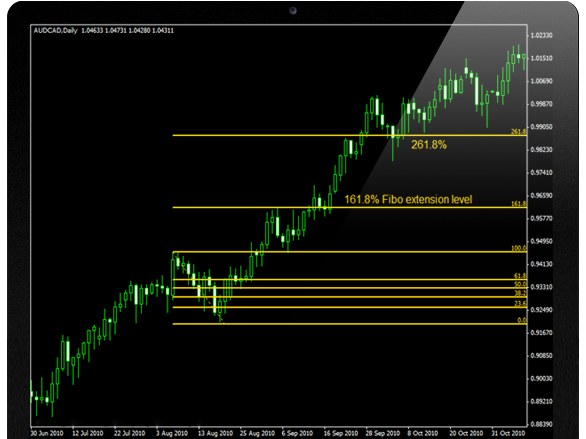 The ratio we derived from the Fibonacci sequence, which is 1.618 or its inverse, 0.618, is known as the golden ratio. It is also sometimes called Phi, which is the Greek letter Φ.

Almost everything in nature has dimensional properties that adhere to phi; the ratio of 1.618. This ratio can be seen in relationships between different components throughout nature and seems to have a fundamental function for the building blocks of nature.

For example, let’s look at sunflowers which form a golden spiral. If we apply the Golden Ratio to a circle we can see how it is that this plant exhibits Fibonacci qualities. 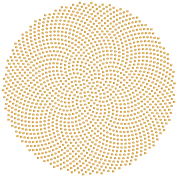 Sunflowers have opposing spirals of seeds, which amazingly have a ratio of 1.618 between the diameters of each rotation!

This is because the individual florets of the sunflower in the center grow in two spirals extending out from the centre in opposite directions. So if the first spiral has 21 arms, while the other has 34, these are Fibonacci numbers, and have the golden ratio. 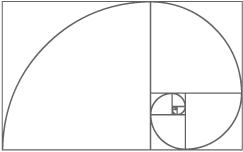 The golden spiral is also evident in shells.

We can also find the golden ratio in the human body. Obviously, everyone is different, but in a perfect human body as defined by scientists this ratio is present.

The ratio between the forearm and the hand gives us the golden ratio!

On the human face we can see various golden ratios, as well. For example:

Fibonacci retracements are a common tool used in trading. They show us by how much a market movement has the potential to retrace or pull back. As we saw previously, the market does not move in a straight line but in a zigzag pattern, creating consecutive peaks and troughs. Then from these tops and bottoms we can derive our support and resistance levels.

Fibonacci retracement levels can help us find these potential support and resistance levels. From these, we can identify potential buy and sell entry points.

The Fibonacci retracement is created by taking two extreme points, which are usually the highest peak and the lowest trough on the chart. We call them the All Time High (ATH) and the All Time Low (ATL). Most trading platforms usually automatically calculate the retracement levels.

The resulting numbers come from dividing the vertical distance between the ATH and ATL by the key Fibonacci ratios of 23.6%, 38.2% and 61.8%. Once these levels are found, horizontal lines are drawn and used to identify possible support and resistance levels.

Finding Retracement Levels in an Uptrend

Below is an example of GBPUSD in an uptrend on a daily chart. 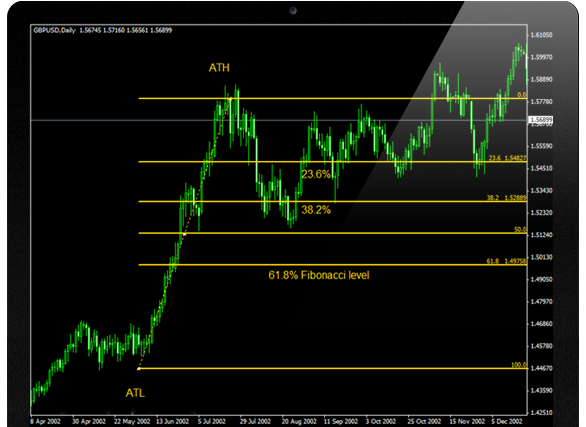 Based on these retracement levels, there is potential in the days ahead for GBPUSD to retrace (pullback) from the recent peak to dip to one of these Fibonacci levels. We expect prices to find support at one of these levels and it will give us an opportunity to enter the market and place a buy order.

After observing our GBPUSD daily chart for a few days, we can see that prices did in fact retrace from the all time high.

We can see that the price dipped to the 38.2% Fibonacci retracement level and then held at the 23.6% level. Strong support was found at this level and prices were unable to close below it, resulting in a bounce. The market resumed the prior uptrend. Here we had a good opportunity to enter the market at the 23.6% level and enter a buy position. 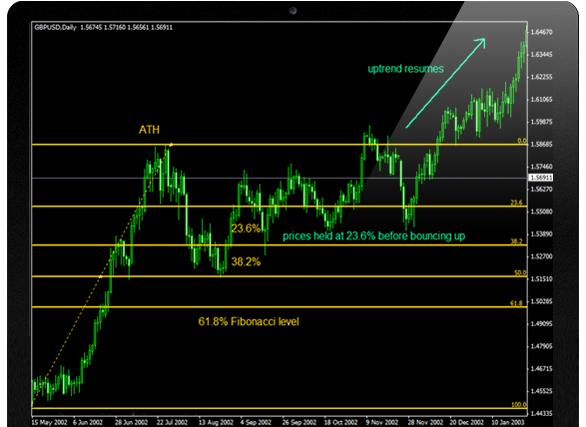 Finding Retracement Levels in a Downtrend

Let us look at a chart for the GBPUSD in a daily time frame in a downtrend. 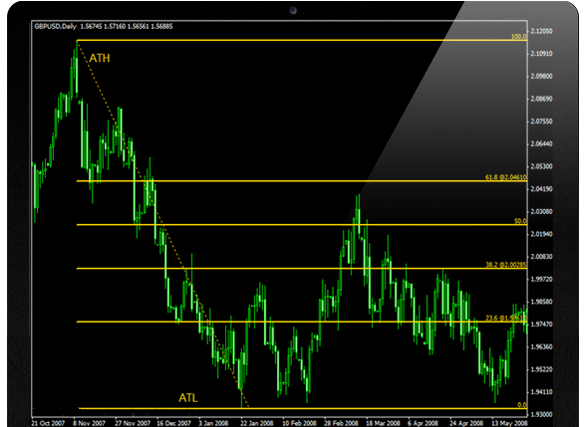 Based on these retracement levels, there is potential for GBPUSD to retrace from the recent trough (ATL) to bounce to one of these Fibonacci levels. We expect prices to find resistance at one of these levels and it will give us an opportunity to enter the market and place a sell order since we expect the downtrend to resume later. After waiting a few hours, we can observe what happened next.

What we can is is that after touching the all time low, prices began to rally all the way up to near the 61.82% Fibonacci retracement level where they stalled just below that level before resuming the downtrend. We had a good opportunity to enter the market at the 38.2% level with a sell order. 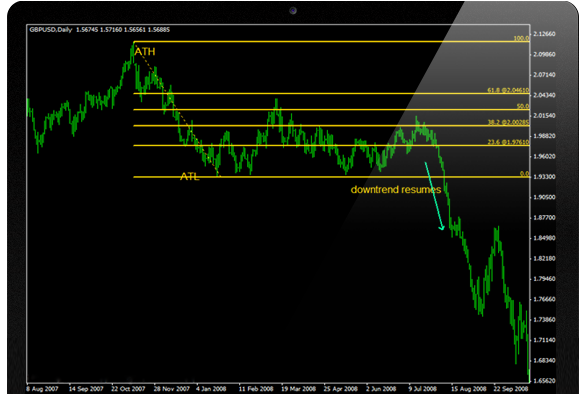 Fibonacci extensions are used by many traders to determine target levels where they wish to take profit. These extensions consist of all levels drawn beyond the standard Fibonacci levels (below the100% level), with the most common extension levels being 161.8%, 261.8% and 423.6%. Fibonacci extensions are a good way of finding out what price move is expected after a swing high or swing low is crossed.

Using Fibonacci Extensions in an Uptrend

When the market is in an uptrend, we look for a swing high followed by a retracement. Then we use the Fibonacci tool on our chart from the swing low of the retracement to the swing high. Notice how this Fibonacci is drawn in a different way from when we used it in finding retracement levels. The Fibonacci extension is drawn opposite to the trend.

By doing so, we get the Fibonacci extension levels we want, which are the 161.8%, 261.8% and 423.6%. We expect that prices will likely find resistance at these levels if they continue heading higher from the retracement.

In the chart below we can see that GBPUSD is in an uptrend. Prices retraced and dipped to the 38.2% Fibonacci retracement level. 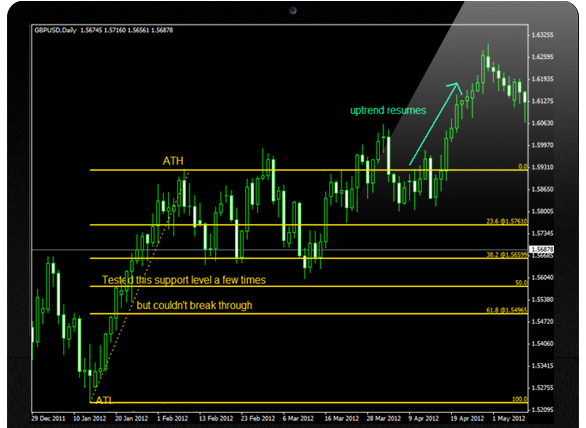 We can see that this 38.2% Fibonacci level was upheld and prices found strong support at this level before bouncing back up to resume the uptrend. Prices eventually rose above the previous swing high (the ATH we used when plotting the Fibonacci retracement levels).

Here the uptrend held in tact and there was a good opportunity to take profit. We would have bought on the dip (just above the 38.2% Fibonacci level). Then we used the Fibonacci extension in order to calculate the target (profit) levels.

In the chart below we can see that the 161.8% Fibonacci extension level was reached which was our intended profit target. This would have been a good place to take some profit. 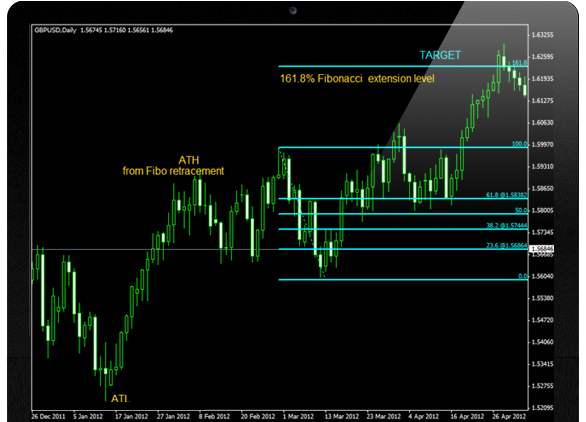 Important! You do not have to close the whole position at one level. For example, you can just take profit on half of your long position at 161.8% and then the rest at a higher target, such as 261.8% if it is reached.

The only reason price seems to reverse around these key levels is because so many other traders are also using the same Fibonacci retracement levels on their charts. So as a result it kind of becomes a self-fulfilling prophecy because these same traders will be placing trades around these key levels at the same time, forcing the price to react as predicted.

It is best to use Fibonacci extensions as a “guide line”.