Ethereum vs Bitcoin: Which one to buy?

For the longest time cryptocurrency market was dominated by Bitcoin, but recently other cryptocurrencies like Ethereum and Ripple have emerged to give Bitcoin some stiff competition. So should you invest in Bitcoin or Ethereum? Is it too late to invest in either of those?

No one can answer that question with certainty. It’s like asking whether to invest in Amazon or Pets.com in the late 1990s. You just never know which one will go bust. Any investment you make whether it be stocks or crypto, there is risk attached to it. The best you can do it minimize the risk by diversifying your portfolio. When we talk about investing in Bitcoin or Ethereum risk to reward ratio is huge.

Before you go about putting your money into cryptos, know where exactly you are investing. It is important to understand the technology behind the cryptocurrency. You can educate yourself by reading the white paper (usually available on the official website) and joining slack channels to engage with the community.

The most important thing you need to do is to keep yourself updated with the latest news. In the crypto world, news spreads like fire and quickly affects the price of the currency. Also, this market is not for the fainthearted. The volatility is extreme. Ethereum price for instance started off this year with $8 and soared to $400 in less than six months. It has again managed to crash back to $200 at the time of writing within weeks of reaching record high.

Bitcoin’s value has continued to appreciate over the years. Although not without its ups and downs. When Ethereum price reached its peak, Bitcoin also registered a record high of £3000. The question still remains.

Should you buy Bitcoin or Ethereum?

On the face of it, Ether and Bitcoin share many similarities. Both of them use blockchain technology, a decentralized public ledger for all the transactions and verify transactions through Proof of Work (PoW). Although Ethereum is looking to switch their verification algorithm from Proof of Work to Proof of Stake (PoS).

At present, more people know about Bitcoin than Ethereum and it also has first mover advantage as it was the first ever decentralized cryptocurrency. Countries like Japan, Australia, Singapore and many more have already legalized Bitcoin as a payment method. This just goes to show Bitcoin can not only be used as a store of value, but also as a payment mechanism for mainstream goods and services. It takes time for any technology to become mainstream. Emails were useless until enough people started using them.

The following image gives a perspective on how tiny Bitcoin market really is as compared to world’s money. 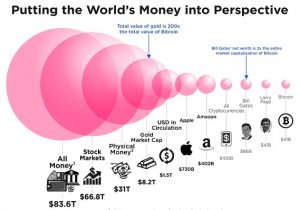 That being said, Bitcoin is still a mystery. No one knows you created it. Satoshi Nakamoto could be a group or one person. Your guess is as good as mine. This puts off average investors who usually invest in stocks. At times they put their money on the CEOs and CTOs based on the kind of experience they’ve had. Bitcoin doesn’t have that sort of hierarchy. All the algorithm improvement decisions are purely based on consensus of Bitcoin core developers.

Bitcoin is in the midst of fighting its first major fight against the miners on scaling issue. In a nutshell, core developers want to scale Bitcoin through Segwit without increasing the blocksize whereas the miners want the block size to be increased to 2MB. The decision will be made on August 1st. Some are calling it the ‘Bitcoin Independence Day’.

There can only be 21 million Bitcoin in the market ever. So by applying basic Economics here – when the supply goes down and demand rises or stays the same, price must increase. Some say Bitcoin could be worth millions of dollars in the years to come. But it might still be too virtual for an average investor to invest.

Ethereum on the other hand was invented by a real person named Vitalik Buterin. He actively engages with the community and boasts about Ethereum. He speaks with authority about its development. Recently Enterprise Ethereum Alliance (EEA) was setup to connect and help large organizations like Microsoft, Intel, Accenture among many others to use blockchain technology.

Although still a new technology, it lets developers build application on top of blockchain. Ethereum itself is not a currency, it’s a platform. Ether is the currency of Ethereum. According to analysts, if Ethereum goes according to plan, there is a good chance it will surpass bitcoin’s price in the coming years. It seems every industry that exists can and will incorporate blockchain technology in one way or the other.

Both Bitcoin and Ethereum looks to be a good investment as of today. The market is going through correction these days due to August 1st controversy. Rest assured, the prices will bounce back up within a few months. Bull market will eventually return. This is a good time to buy.

Investing in cryptocurrencies is one hell of a ride. There are a lot of ups and downs. The community is super active and always willing to help you out. Make sure you always invest within your means. There is no need to put all your life savings into crypto. Invest the amount you’re willing to lose because there is a chance you might lose it all.

How Do Forex Brokers Work
Previous