A carry trade strategy is when a trader sells (i.e. borrows) one currency that is from a country with a relatively low interest rate and then with those funds, a different currency yielding a higher interest rate is purchased.

The aim of this strategy is to make profit from the interest rate differential. Sometimes the difference between the rates can be substantial and also adding leverage can really multiply profits.

How Carry Trading Works in Forex

Let’s assume that you went long on AUDJPY and kept the position open overnight until the next day. Essentially you are buying AUD and selling JPY.

What happens the next day is that your forex broker will either debit or credit you the overnight interest rate difference between the two currencies. This rolling over of your position is known as the carry trade. 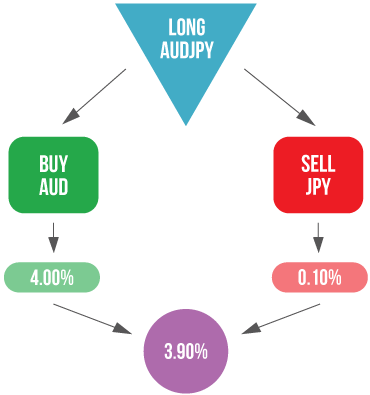 This example is based on 1:1 leverage and assumes exchange rates remain constant for the whole year.

When Are Carry Trades More Successful?

If the central bank in Australia were to raise interest rates, then you would make even more gains. Therefore, you have to be mindful of the economic conditions in Australia. If the Reserve Bank of Australia is optimistic about the economy, then they will likely raise rates.

However, if the economy is sluggish and the RBA believes it needs to lower rates to stimulate the economy, then the AUDJPY as a carry trade would not be that successful. Meanwhile, if the AUDJPY exchange rate moved higher, in addition to higher interest rates, your long position on the pair would gain even more!

Carry trades work best when risk aversion is low and investors are willing to invest in high yielding (risk) currencies.