Bitcoin price chart shows all the time drop in 2017


Bitcoin sank as much as 19 percent, putting the digital currency on pace for its worst week since January 2015, as volatility climbs following a record-setting surge in the price.

After flirting with $3,000 on Monday, the cryptocurrency has retreated to as low as $2,076.16 in intraday trading. Other digital coins are also falling. The decline coincides with a slide in technology stocks that began after a report from Goldman Sachs Group Inc. warned that low volatility in the biggest tech stocks may be blinding investors to risks like cyclicality and regulation. 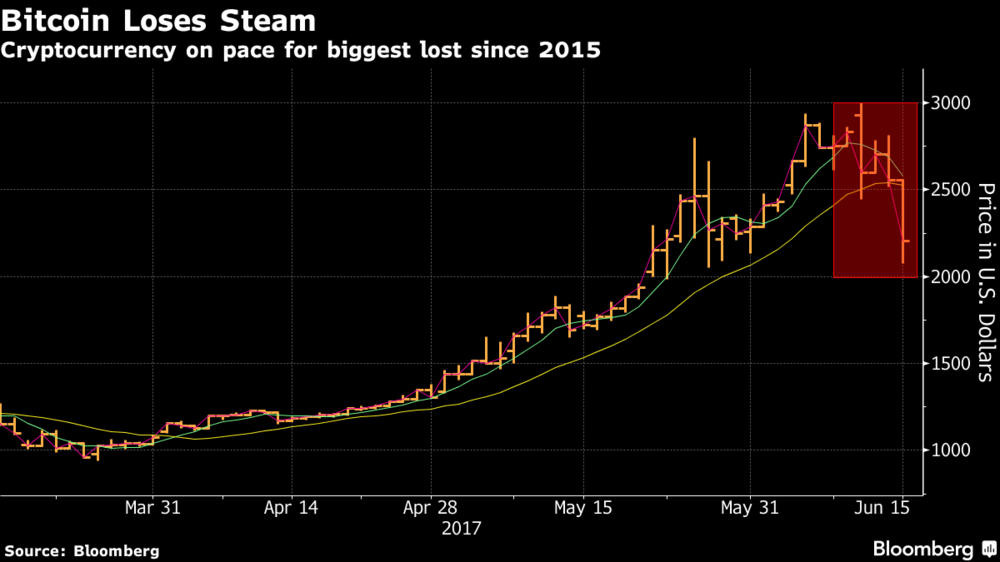 One of Goldman Sachs’s technical analysts, Sheba Jafari, sent out a note early this week saying bitcoin was poised for a reversal. Analysts at Morgan Stanley wrote in a report on Wednesday that bitcoin needs government acceptance and regulation in order to keep climbing.

A Senate bill that targets money laundering and terrorist financing has also drawn criticism this week from some bitcoin enthusiasts, who say the proposed legislation is draconian. The bill, which was introduced in May, includes a section that singles out digital currencies and prepaid access devices.

Many of bitcoin’s cousins, like ripple, NEM and monero, have also struggled in the last week, while the price of ethereum — the second-largest cryptocurrency — has increased 20 percent as investors speculate whether it can nab the top spot.

The weakness in bitcoin’s price also began after digital currency exchange Coinbase experienced an outage Monday due to high trading volume. The interruption followed a slew of recent performance issues that have frustrated users. The exchange said today on its website that it’s investigating issues with load times, and customers “may be unable to load or log in to the website during this time.”.

Ben Terry, a bitcoin investor who works at an impact investment firm in Kentucky, was unable to purchase more of the cryptocurrency due to the outage. Coinbase may not be very reliable, but it’s the most reliable option, he said.

“If there was another competitor, I would jump ship in a heartbeat,” said Terry, who started buying bitcoin about a month and a half ago. “There’s just not a lot out there.”

Bruce Fenton, the founder of Atlantic Financial and a board member at the Bitcoin Foundation, isn’t too concerned about Coinbase’s performance problems.

“Coinbase issues are just typical growing pains,” Fenton said. “When the whole financial system is upended, it’s bound to have some bumps in the road.”

Another exchange, Bitfinex, tweeted Tuesday that it was under DDoS attack, raising questions about the safety of using cryptocurrencies. Last year, Bitfinex had $65 million stolen by hackers.

Bitcoin followers have pointed to numerous other factors that may be contributing to this week’s underperformance, such as the Federal Reserve’s interest-rate hike yesterday.

“The decline coincided with the closure of millions of dollars in long positions on OKCoin, one of the major leveraged bitcoin exchanges, a development that likely exacerbated the decline,” cryptocurrency research company CoinDesk wrote in a June 12 article.

Plus500 scam or not
Previous