The man who last year made global headlines by claiming to be Satoshi Nakamoto, the creator of bitcoin, is working with a fugitive online gambling entrepreneur to file scores of patents relating to the digital currency and its underlying technology, blockchain.

Craig Wright, the Australian computer scientist who made the Satoshi claim, has the backing of Calvin Ayre, a wealthy Canadian entrepreneur, according to people close to Wright and documents reviewed by Reuters. Ayre has been indicted in the United States on charges of running online gambling operations that are illegal in many U.S. states – an accusation he rejects.

Wright’s expertise combined with Ayre’s support make a potentially formidable force in shaping the future of bitcoin and blockchain, the ledger technology that underlies digital currencies. Wright and his associates have lodged more than 70 patent applications in Britain and have plans to file many more, according to documents and emails reviewed by Reuters and sources with knowledge of Wright’s business. The patents range from the storage of medical documents to WiFi security, and reflect Wright’s deep knowledge of how bitcoin and blockchain work.

Their total compares with 63 blockchain-related patents filed globally last year and 27 so far this year by multinationals from credit card companies to chipmakers, according to Thomson Innovation.

Neither Wright nor Ayre would comment for this story on their business relationship, details of which are revealed here for the first time, or their goals. But their interest in bitcoin and blockchain highlights two key trends.

Second, blockchain has the potential to defy authorities trying to enforce borders and national regulations – and it already does so in areas such as online gambling. In internet chatrooms some online gamblers say that using bitcoin enables them to disguise their identity and transactions.

The confidentiality conveyed by the currency is one source of its popularity. Bitcoin hit a record high this week, partly because of speculation that the first bitcoin exchange-traded fund is set to receive U.S. regulatory approval. After a sharp rise this year, the cryptocurrency reached more than $1,200 per bitcoin.

Ayre said last year that he saw a “growing convergence” of bitcoin and online gambling, according to the website CalvinAyre.com. Documents reviewed by Reuters show Wright’s links to online gambling go back decades and that bitcoin grew out of code originally developed with gambling in mind. Early bitcoin code, seen by Reuters and analysed by a computer coding consultant with no ties to Wright or any blockchain-related project, contains unimplemented functions related to poker.

Wright’s vision for bitcoin, though, goes much further than gambling, according to his research papers and interview transcripts. It remains unclear whether he is Satoshi Nakamoto or not, and even whether Satoshi is one person or a group of people. But some of the documents, including two folders of computer code for early versions of bitcoin, support Wright’s claims that he was closely involved in the development of the cryptocurrency before it became public in 2009.

Whatever Wright’s original role, he has suggested bitcoin could have widespread applications. In a paper from November 2015, also reviewed by Reuters, he wrote: “The bitcoin blockchain can be scaled up to replace all existing payment system networks to become the world’s single global economic infrastructure.”

The paper is unpublished, but it gives an insight into the global scope of his plans for the technology. While it’s far from clear the two will be successful in their patent applications, bitcoin and patent experts say Wright’s project represents the single largest filing of bitcoin-related intellectual property they’ve seen. “It’s certainly bullish,” said Justin Hill, a patents expert with law firm Olswang. “With the ambition comes the risk.” 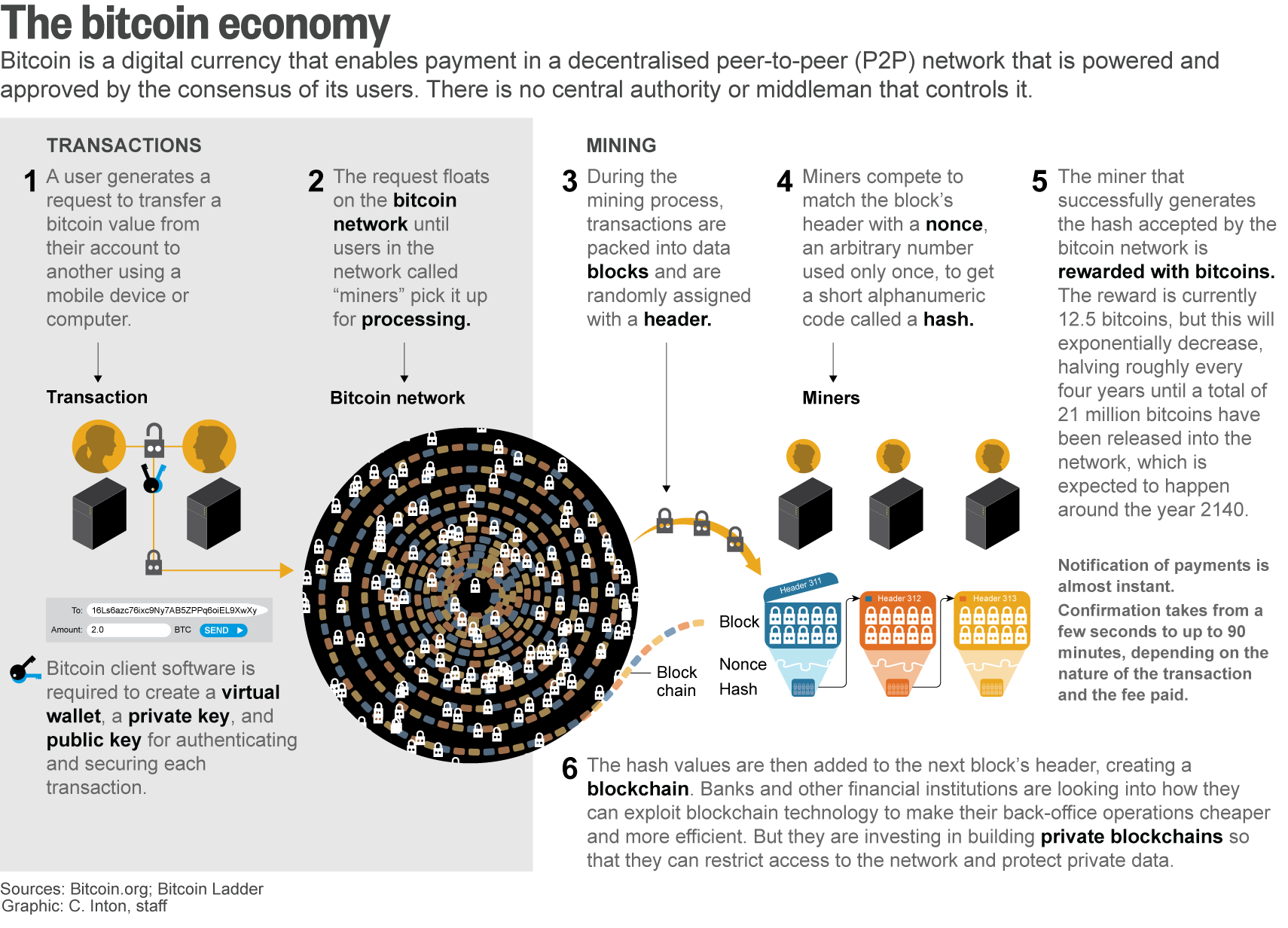 Reuters has previously reported that Wright was filing patents through a company called EITC Holdings, which is based in Antigua.

Ayre lives in Antigua, and EITC Holdings is headed by associates of Ayre, according to one source close to Wright and one with direct knowledge of his business, as well as corporate documents reviewed by Reuters. Australian Stefan Matthews, who began working for Ayre in 2011, was a director of EITC Holdings until at least late 2016. It isn’t clear if he’s still associated with the company. Canadian Robert MacGregor, another long-term Ayre associate, was a director of EITC Holdings until mid-April 2016. The documents do not disclose the shareholders of the company.

Matthews and MacGregor appear with Wright in a June 2015 photograph seen by Reuters. Neither man responded to requests for comment. Sources familiar with the company said they had gone to some lengths to avoid their roles in EITC being discovered.

In September, Ayre posted on his Facebook page that Wright was his “crazy/smart friend.” Photos on Ayre’s Facebook page show him and Wright boating and swimming together in what Ayre identifies as Indian Arm, a fjord near Vancouver, the previous month. A spokesman for Ayre, Ed Pownall, said Ayre was living in Antigua while trying to clear his name and was not doing “any interviews at the moment, on legal advice.” Pownall added that Ayre “wanted you to know the information about him is incorrect.” He declined to specify what information he was referring to.

The range of patent applications lodged by Wright and colleagues is wide. Five, registered on Dec. 14, were made by EITC Holdings with the bland description “computer-implemented method and system,” public filings show. One, registered on Dec. 28, was described as “Determining a common secret for two blockchain nodes for the secure exchange of information” – apparently a way to use the blockchain to exchange encrypted data. Other applications by Wright and his associates relate to sports betting and a blockchain-based operating system for simple electronic devices.

Emails from Wright to Ayre’s associate Matthews, reviewed by Reuters, set out plans to file 150 patents. A person with direct knowledge of Wright’s businesses said he and associates ultimately aim to file closer to 400. None has been approved so far and it’s not clear whether the patents would be enforceable if granted, but Wright’s associates have been quoted as saying the patents could be sold “for upwards of a billion dollars.”

They face stiff competition from other players who are spending significant sums to explore blockchain’s potential. About 70 banks (and Thomson Reuters) have joined a company called R3, which is examining whether blockchain could cut costs in the way financial markets execute transactions. A spokesperson for R3 did not respond to requests for comment.

PwC, a consultancy, said more than $1.5 billion was invested in blockchain companies in 2016.

Whoever wins this intellectual property race, the rush to patent applications poses a threat to the original conception of bitcoin as a technology available to all.

“What was started by Satoshi as an open source project is going to be far from an open project by the time all the commercial projects weigh in,” said Nigel Swycher, CEO of London-based Aistemos, an IP analytics company. “People will try to use patents as one of many ways to protect their interests.”

Details about Wright’s links to the online gambling industry have emerged from previously unpublished information from the Australian Tax Office (ATO), which is investigating Wright over his claims for tax credits relating to bitcoin ventures. In 2014 Wright told the ATO that he had been producing software for online casinos and other gambling businesses when he was writing computer code that later helped to develop bitcoin.

A 2015 video, reviewed by Reuters, shows Wright being interviewed by three ATO officials. Wright is clad in a waistcoat and tie, fielding questions about his complex businesses and claims for tax breaks. At one point he is quizzed about his work for Bodog, the online gambling network set up by Ayre. Wright clams up and says he cannot disclose any details because of “contractual obligations.”

The ATO declined to comment on Wright, saying that its investigation into him was continuing.

A person close to Wright told Reuters that Wright began working for Bodog in 2010. Ayre had set up Bodog in the 1990s. It expanded into entertainment and proved so lucrative that Ayre featured in the 2006 “billionaires” issue of Forbes magazine.

Ayre chose to base his gambling business in Costa Rica. But much of its revenue came from players in the United States, where online gambling was and is illegal in many states. In February 2012, the U.S. Attorney’s Office in Maryland indicted Bodog, Ayre and four other people (Wright not among them) for allegedly conducting an illegal gambling business between 2005 and 2012. They were also indicted for moving funds from overseas to pay winnings to gamblers in the United States.

The Maryland attorney’s office said the case was “still pending.”

[sam id=”8″ codes=”true”]
Wright’s involvement with bitcoin was initially lucrative. He worked on computer code with an American cybersecurity consultant named David Kleiman, and by 2011 the pair had amassed 1.1 million bitcoins, worth more than $1 billion at today’s prices. Their activities were described by Wright in his interviews with the ATO, of which Reuters has reviewed the transcripts. Kleiman died in 2013.

Wright lost money when an online currency exchange ran into difficulties, according to documents reviewed by Reuters. Wright left Australia and relocated his business ventures to Britain.

In 2015, associates of Ayre began setting up companies which are now involved with Wright and bitcoin and blockchain. In September 2015, EITC Holdings, the Antiguan company that has filed scores of patents, was incorporated, originally under the name NCrypt Holdings.

In May 2016, MacGregor presented Wright to the world as the creator of bitcoin through a coordinated media campaign with the BBC, the Economist and GQ magazine. However, when the cameras rolled, Wright failed to convince experts he really was Satoshi – and the bitcoin world dismissed him as a crank.

The publicity misfire led people with knowledge of Wright to speculate at the time that he would stop making bitcoin and blockchain patent applications. Wright did drop from public view. But he continued to produce papers, handwritten notes and voice recordings about patent applications, many of which have been reviewed by Reuters, for colleagues at The Workshop Technologies to convert into patents, according to the person with direct knowledge of Wright’s businesses.

In September last year, a relaxed-looking Wright resumed making visits to the company’s premises in central London, according to the source, who saw him there several times.

In Antigua, meanwhile, Ayre began construction in October of a $25 million call centre, saying it was part of his vision for bitcoin and online gaming. Speech notes provided by Ayre’s spokesman, Pownall, show that Ayre said at a launch event: “I see a growing convergence of Bitcoin, online gaming, virtual reality and gamification technologies, and progressive countries like Antigua are poised to take advantage of this convergence by developing a truly global services industry.”

According to an overview document and presentation slides reviewed by Reuters, in 2015 Wright planned to propose to the Antigua government that the island adopt bitcoin as its official currency. It is unclear which government department Wright approached, or indeed whether he made the proposal as planned. Requests for comment from three ministries in the Antiguan government produced no response.

“Bitcoin is not just a currency,” Wright wrote in his proposal for Antigua to adopt bitcoin. “It’s a new backbone and commercial foundation for the internet.”

Now you know all about Bitcoin Betting Sites and how Bitcoin bet sites doing money laundering so tip ForexSQ experts by share this article on Social networks please.