Towards the end of 2016, different Wall Street analysts, economists, political commentators, and armchair pundits delivered their forecasts on what they expected 2017 to hold. Many forecasts hinted that U.S. President Donald Trump would lead the world into a state of massive geopolitical uncertainty that might be the precursor to world war III. Analysts expected stocks to crash on the heel of the political uncertainties that will follow Trump’s presidency.

There were forecasts that OPEC’s deal to cut oil production will reduce the supply glut and oil prices to rise. Six months gone by in 2017 already and this looks like a good time to take stock of  many of those forecasts with a view to predicting what the rest of the year holds.

Germany is the EU’s stress for the Euro


After the YES Brexit vote and Donald Trump‘s surprise victory against Hillary Clinton, the populist voice became louder across the world and it became obvious that the very fabric that held the EU together is being torn. However, the decisive victory of Emmanuel Macron in the French elections shows that populism is not as strong as political commentators have suggested. Hence, the Euro has found strength against rival currencies.

The fact that Theresa May’s Conservative Party lost parliamentary majority to the Labor party in the last general elections has also made the Euro stronger in the forex markets. Germany’s federal elections holding on September 24 is the next test of the Euro in the forex markets.  If Angela Merkel maintains her lead in the polls into the elections, we can reasonably expect the Euro to climb higher. However, Merkel’s defeat could cause the Euro to fall lower.

Increase in U.S. interest rates will continue to hurt gold

The U.S. Federal Reserve has raised interest rates twice already this year and the fed has hinted that it will raise interest rates at least one more time this year. It is hard to predict exactly how the USD will fare following a ratehike – the dollar edged lower in March after the first rate hike but it recorded some gains after the second rate hike in June. However, we can confidently predict that another increase in interest rates will cause gold to fall much lower. 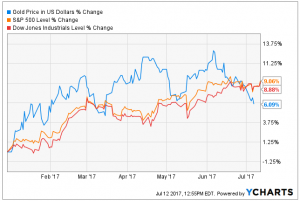 Gold has managed to edge up 6.09% in the year-to-date period to underperform the S&P 500 at 9.06% YTD gains and the Dow Jones at 8.88% YTD gains as seen in the chart above. Rodney Fitzgerald, an analyst at SNP submits that “an increase in interest rates often triggers a capital flight from gold, which doesn’t yield an income to other interest-bearing assets such as bonds.” Hence, we can reasonably expect the yellow metal to lag behind other assets in the event of a rate hike. 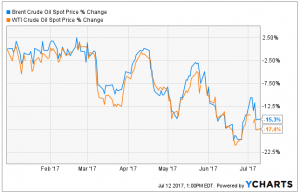 OPEC has made some efforts to end the supply glut in crude oil with a deal to cut production. The cartel also announced an extension of the oil cuts in May in order to push a reduction in the supply of oil. However, fresh news indicates that Saudi Arabia, Libya, and Nigeria increased their oil output in June. Going forward, OPEC will be facing an uphill task getting its house in order in order to force a reduction in the supply glut.

Ethereum vs Bitcoin: Which one to buy?
Previous